How “Let the Nations Be Glad” Changed One Missionary’s Life 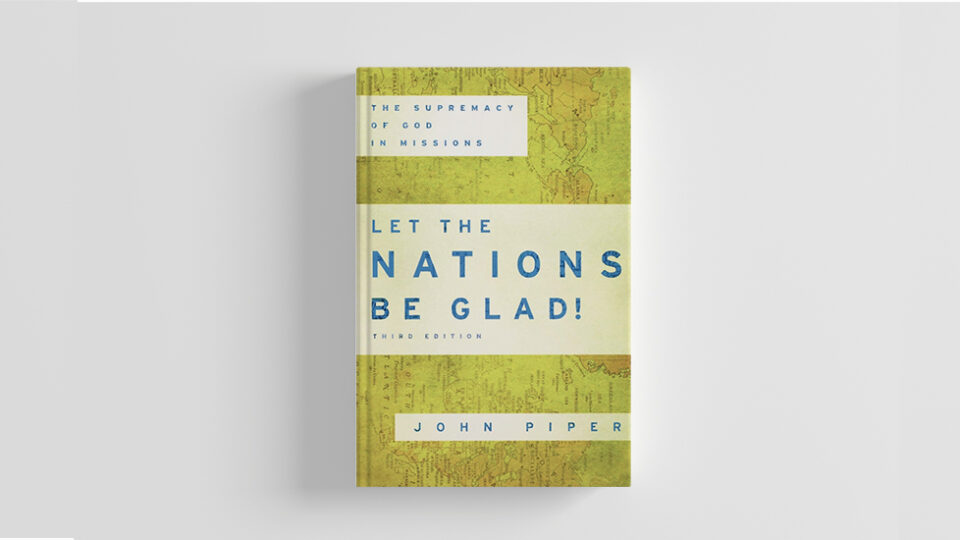 John Piper is famous for stating that books don’t change people, paragraphs do. He’s right, and his comment reminds me of the light-orange sticky note that peeks out from my third edition of his book Let the Nations Be Glad! It’s on page 205, and in the margins I’ve written “nugget,” which is how I describe particularly influential paragraphs. To be fair, this book has many such paragraphs. But in my life, one sticks out and, like a rudder, it has directed my family’s course overseas.

The chapter starts with an illustration. Piper tells of two ocean liners simultaneously sinking in the ocean. As the reader, I was responsible for the rescue but could only focus on one of the sinking ships. While attempting to rescue people from the closer ship, Piper writes, “Then someone cries out from the other ship, ‘Come over and help us!’” At this point, Piper raises a question: “What would love do? Would love go or stay?”[1]

I had no answer. Had I failed to grasp God’s design for missions? Piper’s illustration showed me that I had blind spots in my thinking.

Piper helped me to see that God’s love looked different than mine. But that didn’t produce the conviction to go overseas. That happened after on page 205, when Piper explained from Revelation 5 the supremacy of God among all nations. He unpacked the logic of the atonement as the answer to that terribly difficult question: “Would love go or stay?”

The Great Commission doesn’t merely address the issue of lostness. It also addresses the issue of access. If the multitudes of the heavenly assembly purchased by Christ were left unqualified, then love and lostness would be sufficient categories to consider for the Great Commission. But because “all nations” are represented in both Matthew 28 and Revelation 5, access also matters.

This principle of access is the gold nugget. It’s given me ballast and stability in charting our course into missions. Over the years, many have joined us on the well-worn path overseas, but few remain. Oddly enough, local lostness seems to take many off the path. In other words, many Christians are often only looking at their unsaved neighbors, so they simply never think of those who are both unsaved and unreached.

To be clear, Piper is right when he says, frontier missions “is not the only work of the church.”[3] And I trust God is sovereignly working in others’ lives as they make sense of their personal ambitions and faithfulness. No one needs to be reproached—by me or anyone else—as if they must go overseas. And yet, I’ve heard many prospective missionaries take a self-guided detour because they suddenly—or perhaps slowly, over time—became burdened for the millions of lost people in North America.

Again, I trust God is working all these situation out for his glory and our good. Our family has gone a different path. We believe lostness is important but insufficient to determine our ministry assignment. Instead, we prioritize access, or lack thereof. This has compelled us to spend our lives overseas, and hopefully to stay there for the long-term.

I remember not too long ago sitting with my wife at Starbucks sharing a seminary-budget refill on our iced coffee. We were talking about our future ministry options. Our 1300-person home-church was hiring, and I was about to finish seminary. The possibility seemed attractive.

I still remember looking over her shoulder to the empty table in the corner and remembering Piper’s two ocean liners. I envisioned the large church pastorate as our table with two people at it and the empty table being the mission field. As gently and tenderly as I could, I looked at my sweet, supportive wife and said, “Someone has to go, and I think it’s us.”

With the Lord’s help, we’ve chosen to go so that those purchased by Christ may have access to the gospel of grace. That’s the effect paragraph three on page 205 of Let the Nations Be Glad! had on us. Tolle Lege!