Book Review: The Rise and Fall of Movements, by Steve Addison 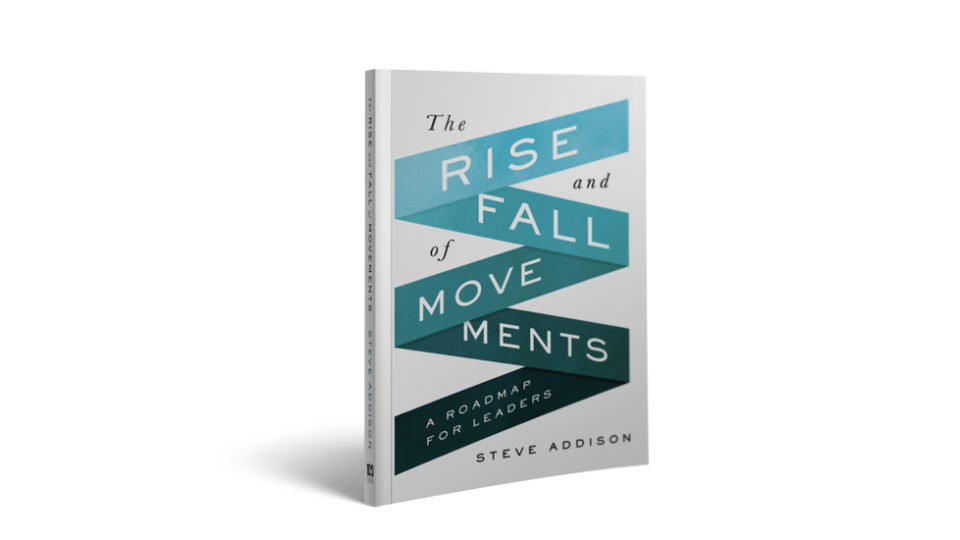 Steve Addison, The Rise and Fall of Movements: A Roadmap For Leaders. 100Movements Publishing, 2019. 231 pages.

In 2008 Steve Addison was facing a crisis. For twenty years he had been training church planters and advising denominations on how to create rapidly multiplying movements of churches, but he was not actually seeing multiplying movements take off. In other words, he was a committed proponent of a philosophy of ministry known as “Disciple Making Movements” (DMM). DMM endeavors to start church planting movements that multiply exponentially so as to overcome the rate of population growth and fulfill the great commission within one generation. But for Addison, that hope was not materializing in any meaningful way. He writes,

I’d taught hundreds of leaders around the world on the characteristics of movements, I’d trained church planters, pastors and denominational teams on implementation. Churches were planted but where was the fruit? We weren’t seeing multiplying disciples and churches (20).

Instead, Addison found himself facing burnout and depression. In this moment of crisis he recounts telling a Christian counselor: “I feel like my life is over. It has no purpose. I’ll leave no legacy.” It was at that moment the counselor responded with words that changed his life: “Who promised a legacy? Who promised that your dreams would be fulfilled? The only guarantee you have is the unconditional love of God” (19). The subtext, left unstated, seems to be this: God has not guaranteed results. He calls us to be faithful and to rest in his love.

After reading this story I thought the book was going to trace Addison’s realigning of ministry commitments. But that’s not what happens.

DOUBLING DOWN ON DMM

Despite these clear statements of biblical truth, the rest of the book does not reflect a fundamental change in methodology. Instead of a book recanting the results-focused, pragmatic, and unbiblical missions philosophy that he and others have perpetuated—which he even acknowledges does not seem to be working and easily leads to depression and burnout—Addison writes a book restating all the same philosophical convictions of his previous books, with the added focus of movement dynamics.

The problem, Addison insists, is not the commitment to rapidly-multiplying movements. Instead, the problem was underappreciating the fact that every movement follows a predictable “lifecycle.” These lifecycles consist of the following stages:

Every stage has opportunities and challenges. Sometimes a movement passes through the stages in a different order, but generally movements follow the same pattern. In the rest of the book, Addison considers each stage, drawing lessons from historical case studies (the Franciscans, the Methodists, the Quakers, the Medieval Papacy, the Student Christian Movement (SCM), and the Moravians) in order to illustrate for church planters how to identify what stage their movement is in and how they can order to avoid decline and decay. If they can hold those stages at bay, their rapidly multiplying movement will reach a phrase Addison refers to as “prime”: “an organization knows why it exists, where it is going, and how to get there . . . ensuring long-term effectiveness” (85).

The historical case studies on the rise and fall of movements form the bulk of the book, but they are really just a springboard for the final chapter, “NoPlaceLeft: A Case Study,” in which Addison moves beyond historical examples to advocate for his particular brand of DMM. This movement, he says, “is one of hundreds . . . popping up around the world that are pressing forward to fulfill the Great Commission in this generation” (34). It is “an international coalition of practitioners, churches, and ministries committed to multiplying disciples and streams of reproducing churches across the world. It’s a cause they embrace, not an organization they join” (157). Although it lacks an organizational center, he says it is part of the same stream as “DMM (Disciple Making Movements” as exemplified in David L. Watson and Paul D. Watson’s “Contagious Disciple Making: Leading Others on a Journey of Discovery” (224). This “movement,” he says, has moved from “birth” to “growth” and is serving as a “catalyst for the Rebirth of existing churches and ministries” (158).

WHAT ARE DISCIPLING MAKING MOVEMENTS?

Addison describes the DMM methodology as a method of rapid church-planting that consists of entering an unreached community and looking for “people of peace” who can be taught to obey the Bible, taught to share the gospel, and plant churches through their own relational networks (174). Addison is far more careful than other authors in the DMM camp and insists that his goal is planting “healthy churches” (190). But his ecclesiological methodology shares in the same pitfalls of DMM that I have described elsewhere.

One major problem of Addison’s work is how he reorients discipleship as obedience to the neglect of faith. For Addison, understanding matters far less than obedience. What he advocates is something called “Obedience-oriented discipleship.” Rooted in Jesus’ final command to teach disciples to obey all that Jesus commanded (Matt. 28:20), this approach involves reading the Bible with non-Christians in what DMM authors call “Discovery Bible Studies” with the primary goal of teaching obedience (164). He writes, “Discovery Bible Study is a participative, obedience-oriented, method of discipleship” (224). In fact, the curriculum for the nine lessons of the Discovery Bible Study is structured on nine imperatives:

As they study these passages, non-believers are instructed to immediately begin obeying them, even if they’ve not expressed any faith in the gospel. The Bible is clear that rote obedience apart from faith is not profitable. Paul spoke of a “zeal for God, that is not according to knowledge” as vanity (Romans 10:2). Jesus’ constant question is “do you believe?” (John 11:25, Matthew 9:28). Rather than emphasizing faith before obedience and obedience as flowing from faith, Addison and other advocates of DMM deliberately seek to have non-believers learn to obey before they believe.

Related to this issue is another glaring weakness—Addison has redefined the local church from a regenerate body of credible professors to a “community of Christ-followers.” The difference seems subtle, but it is significant. Although he claims that the goal of multiplying movements is to “multiply faithful, loving, obedient disciples, and healthy reproducing churches everywhere” (31), he nowhere defines what a church is, at one point writing, “the church is a living organism that grows through its union with Christ” (56). He seems much more comfortable talking about what the church does than what a church is, stating that “a healthy church” should be marked by:

Prayer, sharing the gospel, love expressed in deeds, corporate and individual worship, regular celebration of the Lord’s Supper, giving to those in need and for the spread of the gospel, learning to obey God’s Word, recognizing church leaders (190).

All these things are good, of course, but historically Protestants, and Baptists in particular, have also understood the local church to be a body of believers—people who have made credible professions of faith and show evidence of having been converted. Addison shows no concern for planting churches made up of regenerate believers. On the contrary, he recounts the story of a missionary in Haiti who shared the gospel with a young man named Benna who was living with his girlfriend. That very day, Benna professed faith in Jesus and the missionary baptized him. The missionary then told Benna to share the gospel with his girlfriend and neighbors who in turn “believed” and were baptized. Addison recounts approvingly that nowhere during this time did the missionary talk to Benna about his fornication. It wasn’t until months later that Benna asked the missionary about it and decided to move out until he was married. This, according to Addison, is a perfect picture of disciple-making movements because Benna “learned how to obey Christ and immediately taught others how to obey God’s Word” (165).

AN UNBIBLICAL COMMITMENT TO SPEED

At the heart of Addison’s proposal is an unbiblical commitment to quick results. If our goal is to “fulfill the Great Commission in this generation” (34), then any process that slows down a church’s ability to multiply rapidly must be disregarded.  Church leaders shouldn’t assess the credibility of someone’s profession, but simply baptize them immediately, even if they are living in sin (such as with Benna). Although Addison acknowledges that church leaders should not be chosen if there is no one ready for the role, he insists that churches need not wait to see mature believers raised up before moving on to plant a new church. After all, the goal of DMM is not “controlled converts who do not go astray” but the “spontaneous individual activity of members led by the Holy Spirit” (56).

Even though Addison gives lip service to the idea that every “Discovery Bible Study” group should become a church, it does not seem like he intends for these churches to last very long. Instead, they will be constantly “forming disciples into new groups and churches” (171). If the goal is rapid multiplication, then each “member” will be branching out from the original group to form their own Discovery Bible Study which will hopefully become a church and likewise splinter and multiply. The goal here is not forming churches that last but churches that multiply.

Throughout this book, Addison reveals a lack of depth perception about the Great Commission. When Jesus told his disciples to make disciples in Matthew 28:18-20, he gave four “alls”: all authority, all nations, all his commands, and always, that is, to the end of the age. I think Addison understands and agrees with the first three but lacks a sense of the importance of the fourth. What Addison and others in the DMM camp fail to grasp is the chronological dimension of the Great Commission: Jesus intended for his disciples to build churches that would last “to the end of the age.” Jesus’ words don’t guarantee the existence of any particular church, but they remind us that one aspect of obedience to the Great Commission is seeking to establish churches that can endure over a long period of time.

In 2000, when Greg Gilbert wrote a review of David Garrisons’ booklet “Church Planting Movements,” and Ed Roberts reviewed Garrison’s book, skeptical readers could be forgiven for assuming this was simply the latest fad in missiology which would quickly pass. Now, nearly twenty years later, we are seeing nothing less than the revivification of this hydra-esque mission’s philosophy, with Garrison now authoring the foreword to Addison’s book. Sadly, this reflects a deliberate pivot to entice unsuspecting evangelicals into the DMM camp. After all, like all error, Addison’s book has much to commend it. Throughout it you’ll find references to familiar names such as Don Carson, David Platt, and even a reference to a 9Marks book review by Mike Gilbart-Smith! Because much of the book consists of recounting historical case studies, uncareful readers may not easily notice the departures from historic evangelical beliefs.

Addison’s express intention is to advocate a form of church growth that will “fulfill the Great Commission in this generation” (34), and while his aim is commendable his methods are not. He and others in the DMM camp may create movements that burn hot and fast, but I fear that they will not last.

This article was originally published at 9Marks.org. Reprinted with permission.

A graduate of Georgetown University and The Southern Baptist Theological Seminary, Caleb Morell is a pastoral assistant at Capitol Hill Baptist Church. You can follow him on Twitter at @calebmorell.