Book Review: No Shortcut to Success, by Matt Rhodes 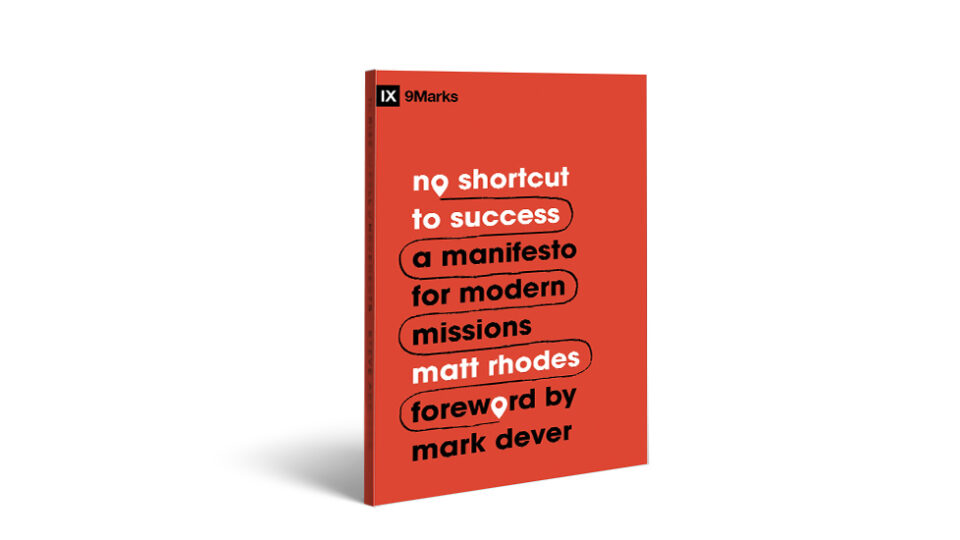 Matt Rhodes, No Shortcut to Success: A Manifesto for Modern Missions. Crossway, 2022. 270 pages.

No Shortcut to Success does to missions what Just Do Something did to decision-making. It calls missionaries to an ordinary faithfulness that doesn’t sound all that spiritual at first blush.

The book’s main idea is simple: missionaries need to be professionals. I know the term “professional” may induce heart palpitations for some readers—it nearly did for me (mostly because I have John Piper in my head saying, “Brothers, we are not professionals”). But I don’t think Piper and Rhodes are at odds. Rhodes doesn’t mean “professional” in the sense of Spiritless, elite, or eggheaded. He just means missionaries should be responsible and devoted to excellence, which is precisely what we expect from other experts in other fields to be (p. 35).

What does professionalism look like? According to Matt Rhodes, it involves at least four things: “(1) investing in adequate theological education; (2) acquiring technical skills—including mastery of the language and culture we minister in—to clearly proclaim the gospel of Jesus; (3) avoiding shortcuts by allocating adequate time, energy, and resources to the task; and (4) evaluating practical circumstances as we make decisions” (p. 35).

Now those four criteria (or “means”) require planning, plodding, and a decent amount of sweat. They’re all very human. And one of Rhodes’ key assertions is, “That’s ok.” God uses Spirit-empowered human means to accomplish the Great Commission and we shouldn’t be so spiritual as to neglect them in pursuit of something new. And yet “something new” is what many missionary leaders are pushing. As a result, these God-given means “are in danger of being despised.”

This is primarily happening through missions methods like Church Planting Movements (CPM), Ying Kai’s Training for Trainers (T4T), and David Watson’s Disciple Making Movements (DMM), among others. Rhodes is not a proponent of any of these. In fact, he critiques these “shortcuts” in Chapters 2-3. Read those chapters carefully. His primary concerns are that CPM-style methods overemphasize numbers and rapid growth; they have an unbiblical aversion to trained teachers; they confuse the role of grace and works in discipleship; and they promote new believers (and even unbelievers) to leadership too quickly.

Before working toward the mission field, I was a pastor for many years. And one of the major concerns I have with CPM is a pastoral one. I suspect there is something of a hidden human cost buried within CPM-style methods that we’re only going to see over time. Rhodes shares the story of a team leader from an organization that heavily promotes DMM. This leader began to struggle with DMM as he reflected on Scripture. He writes, “DMM’s branding makes extensive use of these before and after stories [where a movement was finally catalyzed only after a practitioner got the ingredients right], and the repetition of these stories creates a narrative with an implicit promise . . . failure to follow any one of the DMM principles will mean failure to catalyze a movement properly.” (p. 52-53)

Now the point here is not that anyone explicitly promises a movement if you follow their method. But the barrage of “success” stories where tens of thousands of unreached souls are saved and baptized in a short time contributes to a sense that good missionaries catalyze movements. The result, whether intended or not, is a subtle redefinition of success.

So what if a CPM-practitioner doesn’t catalyze a movement? The implicit promise will turn him inward, and the finger will point at his defective execution of a methodology. For what it’s worth, when Paul faced a similar pressure, he refused to alter his method and prioritized the “open statement of the truth” (2 Cor 4:2). He reminds us that there is a spiritual factor to a lack of visible results. “Even if our gospel is veiled” it’s because “the god of this world has blinded the minds of the unbelievers” (2 Cor 4:3–4). And so Paul does not abandon clear proclamation even when tweaking the method would give the appearance of increased results (2 Cor 4:2, 5).

And what really troubles me is CPM-style methods play on a missionary’s good desire to see people saved and churches planted, promising bread but delivering stones. Cross-cultural life already burns through enough people without the pressure of seeing a new church planted every six months. So if Rhodes’ critique of CPM methods is right, and I believe it is, then we should expect there to be a quiet number of disillusioned workers who discover this first-hand. I hope these missionaries find this book and read it, even if it’s painful. And I pray that God gives them courage to change methodologies, even when it’s costly.

Of course, any change must happen because they’ve been persuaded by Scripture, which is why I want CPM practitioners to read this book. Rhodes does more than graciously, carefully, and biblically critique their method. He uses Scripture to define the missionary identity and the missionary task. In fact, the bulk of this book is given over to that. He argues that missionaries are ambassadors whose primary job is to communicate God’s message with God’s authority (2 Cor 5:19–20) (p. 117). As such, we need to be clear, credible, and persuasive in our communication.

So if you’re a CPM practitioner or know one, I encourage you to get this book. I would also recommend you get this book into the hands of every young person interested in missions. They need to evaluate these ideas before they get pulled in by the anecdotal grandeur. “Come and see that it works” should not be a primary argument for a missions methodology. But stories of it “working” are powerful. So read this book with them on the front end. Help them understand the current landscape of missions today. And then disciple them to evaluate the ideas biblically. This book will be an excellent tool for that.

Finally, if you’re in any role of church leadership, for the sake of those under your care, whether in sending or supporting, get this book and read it.