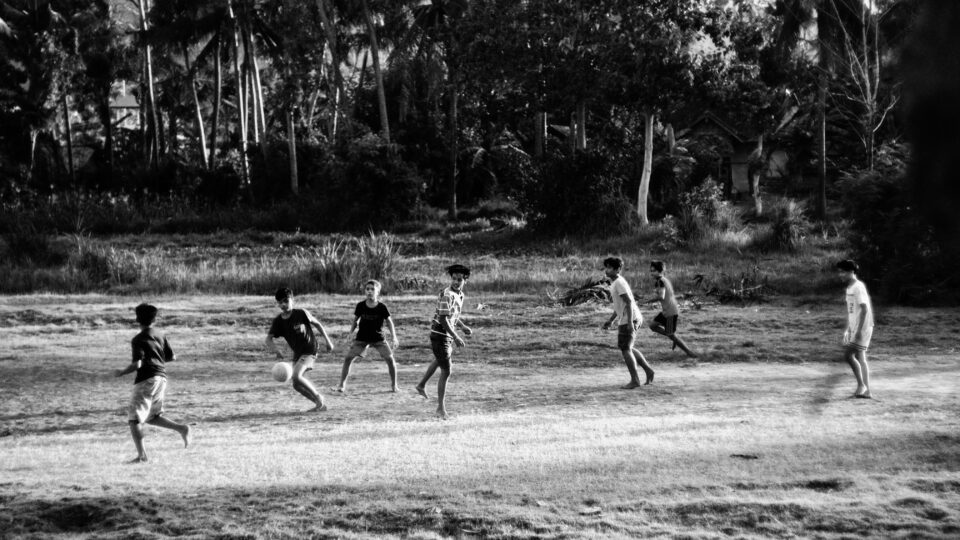 Older missionaries often repeat the same story. Here is one of mine.

Some years ago, I visited some Latin American missionaries in a country in the 10/40 window. One of them invited me to visit the soccer ministry he had developed. I met him early one morning in a large city park. When I arrived, I found a large group of boys running drills. One group consisted of older teens, while the other was younger. My friend was working directly with the younger group, and he told them, “I want you to meet my friend from Argentina.” The boys were wearing maroon soccer jerseys. When he mentioned Argentina, half of the boys excitedly raised their jerseys to show that underneath they were wearing the blue and white stripes of Argentina’s national team. Then they began the traditional chant, “Argentina, Argentina!” I loved it! But when these boys began to cheer, immediately, another group revealed their yellow Brazil jerseys. It was hilarious to see South America’s greatest soccer rivalry re-created in that country.[1]

I was sure my friend engineered this for my sake, but last year provided evidence that it represented true sentiments in that part of the world. When Brazil and Argentina met in the final of the Copa America, rival groups of fans clashed violently in Bangladesh (not the country in my first anecdote) and the riots had to be quelled by the police.

Latin Americans often find special points of contact with the rest of the world. This experience helped me understand the importance of a significant trend in world missions: the transition from “the west to the rest” to “everywhere to everywhere.” To further understand its significance, we can briefly look at it from the three perspectives: history, culture, and geopolitics.

A simple survey of the history of world mission might highlight the initial expansion of the gospel in all directions from Jerusalem, followed by a consolidation around the Mediterranean basin. Next came the onslaught of Islam that reduced Christendom to a European footprint. And later, the growth of Reformation churches in Northern Europe.

In the 19th century, the world saw a great reversal of these trends. Evangelical mission efforts spread to every corner of the globe. The Great Century had been foreshadowed by efforts from Calvin’s Geneva, the Moravians, and the New England Puritans. However, modern missions was born when the Northamptonshire Baptists sent William Carey to India. This spark lit a flame that spread to other denominations.

During this age, European churches and missions boards sent missionaries to all corners of the unreached world. The primary initiative passed first from European continental efforts to the British Isles and finally to the United States. Thus, the 20th century saw the heyday of North American missions.

Thankfully, the success of the European stage led to the latest period in missions history: from everywhere to everywhere. In other words, there really is no longer a “center” of world missions. For example, according to one source, more than 12,000 missionaries have been sent from Latin America. More than 50% of these are working among the least-reached areas of the world.[2] The next two perspectives shed light on the advantages of embracing this historical trend.

William Carey placed great emphasis on preparing Indian preachers and pastors because he understood that the great subcontinent could never be reached by an exclusively European missionary force. Indians best understood their culture.

A similar dynamic comes into play when we consider cross-cultural missions. Latin Americans, for example, have great cultural affinity with some of the neediest areas of the world. For almost 800 years, the Spanish peninsula in the North African Maghrib formed a cultural unit during the Islamic occupation of Spain. Many of our English words have French or Germanic roots. On the other hand, many Spanish words have Arabic origins. The word ojalá is a common way to say “I hope” or “hopefully” in Spanish. It derives from the Arabic expression “ma sha allah” meaning “should God will it.”

Here’s another example. North Americans can find Latin American punctuality a bit frustrating. However, in this, Latin Americans more closely resemble Islamic cultures that generally emphasize relationships more than time management. In my experience, Argentines tend to have an intuitive understanding of Islamic culture and are often uniquely effective in working with North Africans.

The great 19th century of evangelical expansion was at times intertwined with colonialism. The relationship between the two was often fraught. In Carey’s case, colonial authorities opposed his work. Nonetheless, British colonial presence in India provided a useful logistical bridge. In the 21st century, the United States looms large in world politics. Because of this, in some places it’s desirable for missionary efforts to be disassociated from the mistaken belief that evangelical Christianity is primarily an American phenomenon.

This absolutely doesn’t mean American missionaries have no role, but it does highlight the value of multinational teams. In some areas, Americans will be most productive by supporting frontline teams made up of missionaries from other parts of the world.

What we can do

I’m suspicious of one-size-fits-all solutions to widely divergent situations around the world. So let me just tell you what I think Americans can do to promote the growth of global missions from Argentina.

First, don’t walk away from supporting mission efforts in Latin America. There are still many unreached areas of the continent despite the dubious statistics that often replace serious missiology nowadays.

Second, support projects that provide theological resources. While it is true that evangelicalism has grown in some parts of Latin America, much of it involves a deficient gospel that ranges from a typical health-and-wealth message to an overt syncretism with animism. We need support for publishers and theological institutions that are based in Latin America. They will be more discerning and more effective at getting faithful resources in the right hands.

Third, come alongside Latin American efforts to send missionaries to the rest of the world. While North Americans must be humble servants, we have almost 200 years of institutional experience in sending and maintaining missionaries on the field. The Apostle Paul led an international missionary team. Who knows, it may be an idea whose time has come again—an ancient idea for a new missionary era. Sam grew up in Argentina and faithfully served alongside his parents for many years. He returned to the United States to attend college in 1981. It was there that he met his wife, Carita. Shortly after marrying, Sam and Carita moved to Miami to serve at the International Bible Baptist Church, ministering to both the English and Spanish-speaking communities. After nearly eight years of service in Miami, they traveled to Argentina as missionaries. In 1997, Sam led a team that began Centro Crecer Church in downtown Córdoba. God has blessed the church, and seven additional churches have grown from the work. With the growth of the church also came the need for theological education. In 2006 Seminario Bíblico William Carey was begun. Initially set up as a virtual campus, SBWC now has seven study centers in the Americas and reaches students in eight countries.