“A special people called out by God, living under His covenant of grace, being preserved, protected, and redeemed by Him and for the glory of His name…this is what the history of the church is all about.”  This was a repeated statement of mine throughout the week of teaching.  The training session for the week was on Church History.  We began with a focus on the sovereignty of God so that the Panamanian people could clearly see throughout the week that they are part of God's redemptive history…a story that is still unfolding today that portrays the grace and glory of God.  Our week was met with much enthusiasm as the people compared some of the events of church history with the events of their own lives and churches.  It was a humbling time for all of us to see that God has always used an imperfect people to accomplish His glorious and perfect will.  Our desire for the week was not just to communicate facts and knowledge, but rather to connect God's people of Panama with all of God's people who have gone before them who have been used by Him to unfold His plan of salvation and redemption.  I am thankful for God's grace that enabled us to accomplish that goal.

The special part about the week was seeing that these Gospel truths that were shared were not only reaching other latinos, but also reaching some indigenous people groups that were represented at the training . . . indigenous groups like the Embera who don't even yet have all the Scriptures in their own language.  To see some of these indigenous people with their Bibles open and rigorously taking notes all throughout the week was quite a highlight.  To know that what we were imparting to them through Reaching and Teaching will be used by God to be taken back to reach their own tribes with the saving message of the Gospel is something that brings overwhelming joy.

The team consisted of three of us from Reaching & Teaching.  Since we were teaching at two different locations each day, our time was extremely busy and the workload was quite heavy. But God's grace was sufficient and we are thankful to have been used by Him to share with the two different groups.  The close of each session involved a time of Q&A which truthfully could have opened up doors for more hours of teaching if there had been time.  There were many questions, but all of their questions showed that they were understanding what we were teaching them as well as showed us a hunger that they have to truly learn.

We are also thankful to Kenny Morris, the IMB missionary in Panama who organized and hosted us for the week.  It was great to hear how the Lord is using him to reach the indigenous people of Panama.  Each morning in the rural setting, he would have one of the indigenous people whom he has been working with stand up and share a story from the Bible. He has been teaching Bible Storying to them since many of the indigenous peoples are not literate.  So, each morning, somebody would start our session by sharing a specific story from the Bible.  Again, what a joy to know that the mighty works of our great God and Savior are being communicated even in story form for those who will never be able to read the Scriptures themselves.

It was such a blessing to teach along side of Trey and Mike, of whom both are excellent teachers.  I myself learned a lot from listening in on their sessions.  Although, I don't think they can say the same for me however since I was teaching in Spanish! 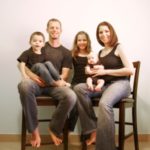 Cody Whittaker is a Reaching & Teaching missionary serving in Ecuador.